I’m writing this post late today because I am absolutely floored by the passing of David Bowie. I can promise you right now: this post will not be unique, especially not today. I know that the world and the internet is abuzz with words, thoughts, and feelings all revolving around the passing of this true rock and roll legend. And yet… I can’t keep quiet.

I recall days spent with my mom, putting on first records, then tapes, then cds and rocking out. Jumping from couch to chair and back again, dancing around the living room (cliché alert) like no one was watching. When I was totally pooped from dancing my fanny off, I remember crashing down onto the couch out of breath and studying the artwork on all of Bowie’s albums. Aladdin Sane was a clear favorite, but I was always struck by how bold, graphic, and totally unique each album’s art was. I poured over each album cover like it would contain secrets to something I didn’t even know existed. And the sounds he produced… I don’t even know where to start. The Rise and Fall of Ziggy Stardust and the Spiders from Mars spoke the most to me as a kid; I’d just never heard anything like that before in my life.

David Bowie taught me to be weird. In grade school, I wasn’t popular, but I wasn’t a dork either. I was somewhere in between, which almost feels a bit more like no man’s land than anything else. I’d go home and pop on some Bowie and he was just so weird and so cool because of that. It gave me hope.

Then there’s David Bowie’s creative influence. The man had a vision and he stuck to it. In my mind, the man was a creative force with his own style that no one could ever possibly touch. As I got older and was in design school, I rediscovered David Bowie thanks to The Life Aquatic. I can’t even tell you how many hours of my life were spent in the woodshop with that soundtrack on loop in my earbuds. If ever there was a soundtrack to my own personal creative development, it would be that album. Funny how that works, huh? And now that he’s passed and left us a beautiful farewell album, my heart feels heavy. Seriously, take some time to pour a drink and give Black Star a listen. It’s like he has written a goodbye note to us all and that thought on it’s own is so entirely amazing.

So today I’m pausing to remember not only a public legend, but a personal hero. I’m immersing myself in every David Bowie record I have and when those run out, I’ve made a playlist on Spotify. If your heart is heavy today at the passing of rock and roll’s biggest free spirit, give this a listen:

Goodbye, David Bowie, and thank you for teaching me it’s ok to be weird.

It’s no secret that I just moved, so now is the perfect time to throw a housewarming party to celebrate my new space. I’m thinking dinner party for just a few close friends in my new loft. I want it to feel really cozy and intimate, with lots of great food and wine. Recently, Aether sent over the Cone, which is billed as “the thinking music player.” I decided that it was the perfect excuse to craft a playlist for my housewarming, something that makes my guests feel totally comfortable and at ease. 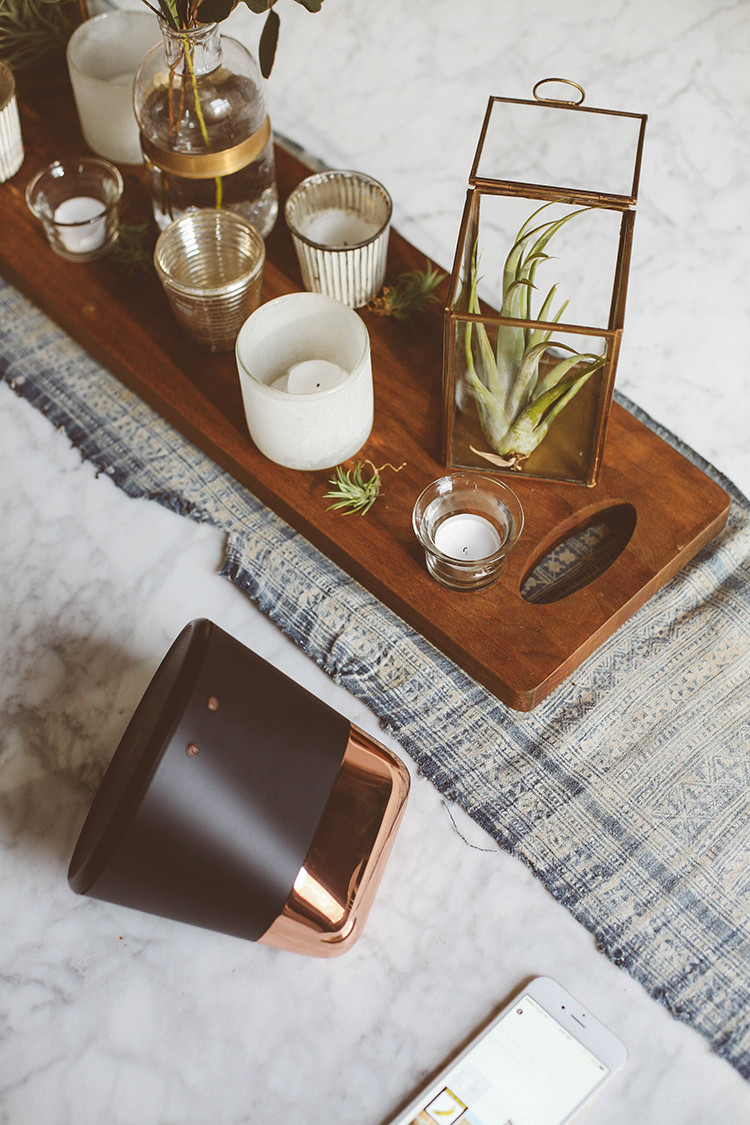 I absolutely love to entertain, so treating my guests to a curated playlist feels right. But I don’t want to be stuck playing dj all night. Instead, the cone makes it super easy to control the music while still being able to pay attention to guests. Not only is it voice controlled, but it’s also super portable and has an 8-hour capacity battery. All this adds up to one less thing to worry about when hosting a dinner party. 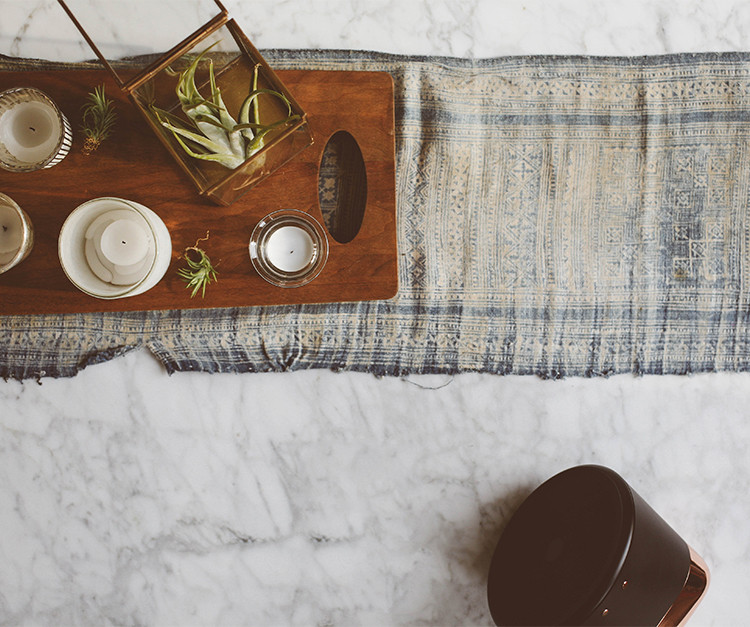 I also really love the design of the Cone. The mix of materials (and that gorgeous copper) and striking simplicity is a great conversation piece at a dinner party. When the party is over, it’s such a beautifully designed piece that I don’t mind keeping it out on top of my dresser or even on my desk at the studio. 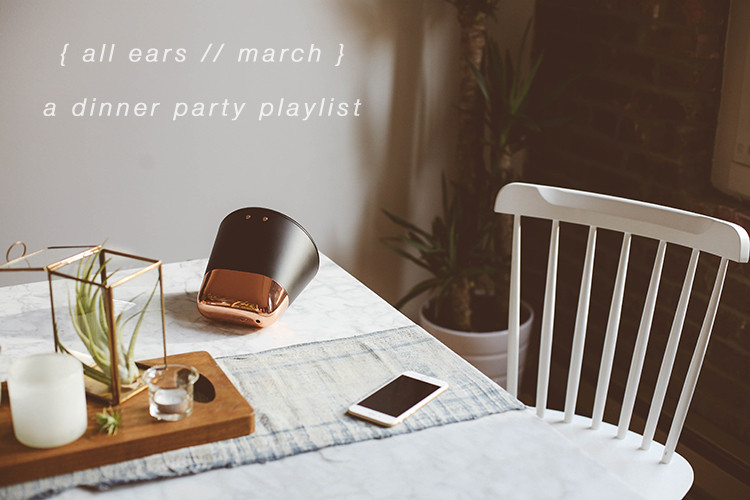 And now for the playlist… I started this with some of my favorites and just built it around the ebb and flow of a dinner party. Things get a bit slower and sexier as dessert time rolls around. Have you ever noticed that things take that turn when the wine starts flowing and the candles burn a little bit lower?

You can listen to the playlist on Rdio, which is 100% compatible with the Aether Cone.
Disclosure: This post is partnership with Aether. All opinions are my own. Thank you for supporting the content that keeps Jojotastic awesome.

I want to do something different this time around. I don’t want this month’s All Ears playlist to be love songs, ballads, and the like. That just feels… played out (pun intended?). Instead, I want this month’s playlist to take you, my readers, through a bit of the journey that I’m facing this month. This month (really, in less than 14 days) I leave California in my trusty old VW and drive north to the only place that’s ever felt like a true home, Seattle. I’m leaving behind so much, but in my soul I know this is the right choice for me. It’s bittersweet, yes, but it’s the only thing that actually makes sense in my life right now.

This playlist has two parts: the first is meant to be a bit of a love letter to California. This gorgeous city and state welcomed me with open arms and, although it’s only been year, I find myself changed and improved. The second half of the playlist feels like the best way I can ever possibly explain all of the feelings that are wrapped up in what it means to go ‘home.’ Sometimes it’s easier to let another explain the emotions.

You can play via this widget or add the playlist via Spotify:
photo from my Instagram — follow along on my #PNWpilgrimage to see more. listen to more All Ears playlists here.

This week has been pure insanity. Between meetings, getting quotes for my upcoming move, and starting the packing, I’ve been way too absent from my desk all week. Isn’t it funny how you long to be away from the desk, but sometimes putting your head down and and cranking through some stuff is all you want? That’s where I’m at right this minute, so I decided to create a playlist that keeps the creative juices flowing and my energy levels up. This is a two-fer though — I like to list to most of these songs while I’m at the gym!Here’s to a productive Thursday…(p.s. apologies, but most of the songs are labeled as explicit.)

image via my instagram
listen to more All Ears playlists here

If you’re anything like me, any day now you’re about to hop on some planes, trains, and automobiles to go home for the holidays. To get you through the traffic and queues, I decided to craft the ultimate travel playlist this month. It’s a bit mellow, kind of energetic, and has a feeling of optimism. Oh, and not a single Christmas carol. The way I figure, we’re already heard plenty of that, with even more to come as you make the holiday party rounds. I envision listening to this playlist as my plane takes off, gearing up for the frenzy of family, parties, and travel.

You can play via this widget or add the playlist via Spotify:image via my instagram
listen to more All Ears playlists here

This month’s playlist is dedicated to my beacon in the night, the moon. Whenever I feel the pull of the ocean or unsettling thanks to Mercury, it’s hard for me deny the impact the moon has on my being. On nights when I find myself riddled with insomnia (often), I lay flat and glimpse the moon through the window above my bed — ever calming, tranquil, and the greatest reminder to be present. While I currently live in a city entirely too bright to see the stars, at times I drive far, far out of my way to catch a peek of them, too. There’s something about the night sky that’s also just a bit romantic, too. I envision nights spent in a field, laying in the bed of an old pickup, holding hands with the one you love. This is what I’d play.

image via my instagram
listen to more All Ears playlists here

Always on the lookout for more ways to make this blog more meaningful and personal, I decided to start a new series entitled All Ears. Basically, I want to share a playlist every month with you that sort of… encompasses what I’m feeling, what the season calls to mind, even the songs that get me out of bed in the morning or make me shake my ass.

This month, I’ve got this yearning for comfort, peace, and tranquility. I’ve just come off of a nutso month and I feel these intense nesting urges deeper than ever before. We all know I’ve been contemplating the meaning of home a lot these days, so it’s clear that I’m feeling very wistful and reflective. Couple that with the changing of seasons and this is the playlist. Oh, and be sure to crank it around 4:38 on the second song. It’s good, I swear.

Meet the heart of our home ❤️ I love how open

SNOW DAYS ARE THE BEST DAYS ❄️ I went to bed l

All About My First House:

Learn how to entertain in style: 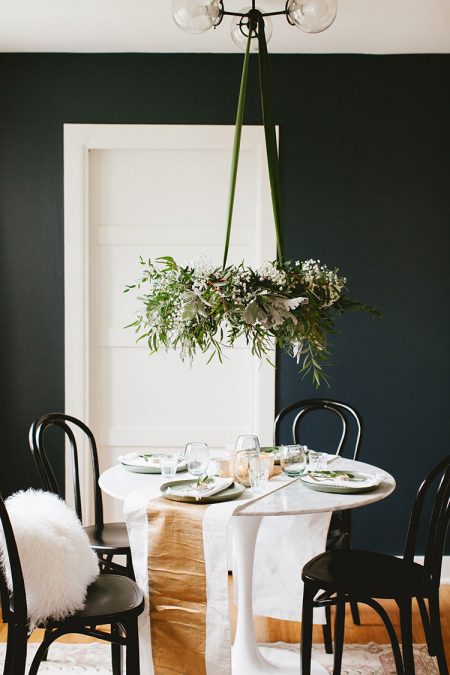 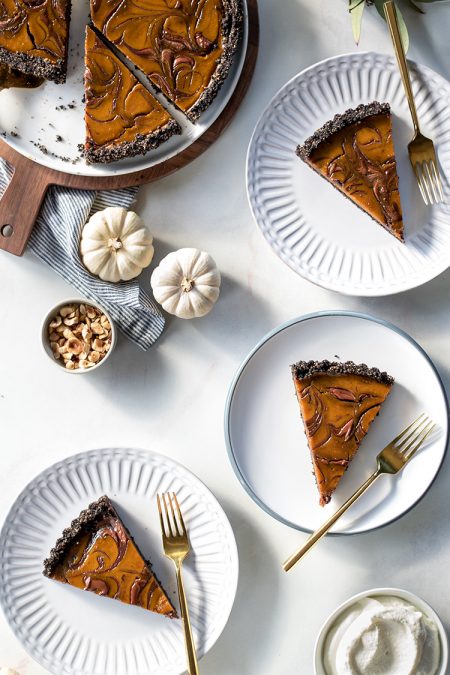